The chalice columns are one of the architectural highlights of the Stuttgart 21 construction project. A total of 29 chalice columns support the ceiling above the new underground station and, thanks to their open-top shape, direct daylight into the station concourse. Now the first of the imposing chalice columns was poured. Two SCHWING truck-mounted concrete pumps from Godel-Beton, a S 36 X and a S 43 SX III, were in operation. With their help, around 460 m³ of white concrete delivered by Stetter's UltraEco truck-mixers from the nearby mobile batching plant were put into the formwork. A particular constructional challenge for the responsible companies was the specification of the client and the architect for optical reasons to do without a reworking of the exposed concrete surface. The chalice columns are built in three different variants. The so-called standard chalice consists of a full circle and has a concrete volume of 650 m³. In addition to the full circle, the edge chalice also contain the directly adjoining wall. This wall-column combination has around 780 m³ of white concrete, the largest volume of the column variants. The last variant, the so-called residual chalice, consists of half a chalice column and the adjoining wall. Both components come together to a concrete volume of 460 m³. With the conversion of the existing terminus station into a lowered transit station, the city of Stuttgart will have new possibilities for the transformation of the inner city area. A new inner city area is to be created on the vacant area of the main station. 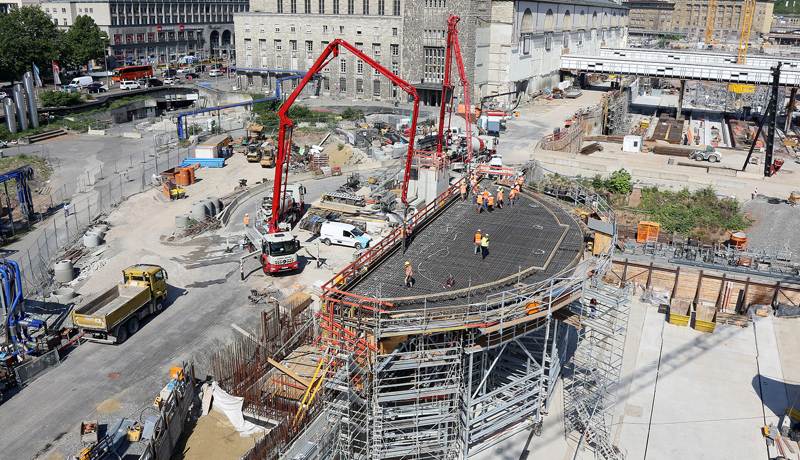