Towering Performance on the Gulf

A massive condo development is taking shape on the Florida coast

Five years ago, in the pages of this very publication, readers were introduced to Allen Concrete and Masonry, Inc. (ACM), a family-owned, full-service concrete contractor based out of Naples, Florida. At that time, the company was just embarking on a massive gulf coast development called Kalea Bay that, when complete, would complement upscale condominium living with a wealth of available amenities.

Fast forward to the present and we find the company well into Tower 300, the third of five 24-story units. Though the overall scope of the project has remained relatively constant over the last half-decade, ACM, driven by both an increase in subsequent tower size and evolving customer demands, has made noticeable changes designed to keep production on pace.

Through it all, however, it has relied upon largely the same lineup of pumping equipment from Schwing America that’s proven successful since the first yard of mud was pumped at Kalea Bay in 2016. That includes a pair of S 61 SX pumps, a KVM 52, an S 39 SX pump with detachable boom—the newest addition—two octagonal masts, two SP 1000 trailer pumps and an SP 500 trailer model. A recipe for success.

CONCRETE: THE NEXT GENERATION
With 120 employees and an arsenal of vertical equipment, the pumper is well-suited to tackling a project like Kalea Bay. According to Zach Allen, company vice president, however, the term “concrete pumping contractor” doesn’t tell their whole story.

“Our specialties include pumping for vertical concrete construction, but our expertise goes much further than that,” he said. “As we’ve grown, we’ve seen the direction industry was headed and have responded with a focus on technology. So not only do we perform in areas such as post-tension decks and rebar installation, we also utilize a full 3D BIM modeling department, use robotic total stations for our layout, employ the use of the latest job management software, and more. Since my father founded this company in 1986, our goal has always been to provide a safe workplace for our employees and outstanding quality to our customers. The difference is, we do that now by utilizing all the latest tools and solutions available to us. Not surprisingly, that also sets us apart from many others in this field.”

Since starting at Kalea Bay, the company has also made its foray into the hoisting realm, acquiring its own tower cranes. While doing so is becoming more common for much larger companies, ACM saw it as a good fit for them as well. “It can be a nice benefit, particularly on long-term projects like this, for us to have control of the hoisting,” said Allen. “Having that crane availability right when we need it can really help us accelerate the project.”

ROOM TO BREATHE
The composition of the soil at the Tower 300 site dictated that a traditional mat foundation be bypassed in favor of auger-cast pilings and pile caps. For that, Keller North America (formerly HJ Foundation) bored approximately 900 16-inch-diameter piles as deep as 90 feet down to bedrock, and the pumper followed up with the caps.

“We used the 61-meter pump to pour more than 3,200 cubic yards of concrete into the pile caps alone,” said Andrew Rieke, the pumper’s project manager. “Obviously, with a structure of this size, you’d expect the caps to be sizeable—and they did not disappoint. Some of them measured as large as 60 feet by 44 feet and five feet deep. It was just an indicator of what was to come.”

What was to come was 24 stories of large-scale pours on a structure that would, by project’s end, contain more than 40,000 cubic yards of concrete and 2,000 tons of rebar. Rieke said that the design of Towers 200 and 300 differed from the structure built in 2016 in a number of ways.

“There were changes made after the first tower was completed to accommodate larger, more open floor plans,” he said. “As a result, the square footage per floor increased from 22,000 to 28,000, yet the number of columns was reduced almost by half—from 76 to 40. To compensate for the change, the 12-inch-thick, variable-length columns were fashioned to essentially serve as shear walls, and the post-tensioned floor slabs were thickened from eight inches to 10 inches. It’s important to note that there are nine elevator shafts and six stair shafts on every floor, so, in addition to the 890 yards of concrete in every deck, there’s more than 320 yards of vertical being poured per floor. It’s a concrete-intensive project, for sure.”

SEPARATE AFTER SIX
As work progressed upward on the structure, which offers 727,000 square feet of total space for both residences and amenities, the pumper used its pair of 61-meter pumps and the 52-meter unit to pour levels one through five. Then, according to Ben Roberts, also an ACM vice president, the company flew its S 39 SX detachable boom upward to serve as a separate placing boom, moving between a pair of octagonal masts for the balance of construction.

“Moving to the placing boom at level six held a couple advantages for us,” said Allen. “In addition to taking us upward beyond the reach of the truck-mounted booms, it freed up the larger pumps to pour the massive 40,000-square foot front mezzanine which serves as the arrival entrance to Tower 300. We used the 35-meter SPB in one location to get us coverage for three-quarters of each floor, then re-positioned it to the second mast to get the remaining area. Because of post-tensioning limitations, each deck typically involved two pours: a large one of 520 yards and a secondary pour of 370 yards.”

According to Allen, moving the octagonal mast upward has been perfected to the point where they can now get it done in roughly 30 minutes. In addition, they have a hydraulic self-jacking system which can be called upon should crane time become an issue.

“That’s yet another thing that has changed since Tower 100,” he said. “Since then, we’ve reset the crane so that we can move the boom and the power pack in one pick, which has really improved efficiency in that part of the operation.”

“The number of cores and shear walls on this project would ordinarily present a challenge to productivity,” he said. “However, because of the four-section, Roll & Fold design of the boom, we have been able to easily reach over any obstacle and still make every pour with confidence. Rebar for the columns and shear walls is placed two floors at a time, so it extends upward about 24 feet above the deck on every other floor. Just being able to work around a challenge like that makes the SPB worth its weight in gold.”

Which is not to sell the performance aspects of the placing boom short. Allen said they are dealing with some hearty material, including a 10,000-psi mix for vertical pours that they are batching with chilled water to slow cure times, and a deck mix that had to get to 7,200 psi in 24 hours. “This is a straight cement mix that has proven very abrasive to pump,” said Allen. “That design switches to a 5,000-psi mix with fly ash at Level 5. In order to get the breaks that have been specced and stress the cables for the next day’s work, everything out here seems to be a high/early mix. But the pump’s handling it all just fine.”

CELL WALLS
Drawing upon their strengths in masonry, the pumper handled all the block work at Tower 300, utilizing their SP 500 trailer pump for filling cells on the lower floors and turning to the pair of SP 1000s for similar work and more in the upper levels.

“We have the SP 1000s utilizing a three-inch delivery line that is routed through the building and then upward to whatever level it is needed,” said Allen. “From there, it steps down to two-inch line for filling the cells. To minimize the need for manual vibration, as well as to help deal with the dense rebar, we are using a self-consolidating grout. This also helps eliminate the risk of any voids within them and ensure the highest level of integrity in the CMU walls.”

In addition to cell filling, the SP 1000 was also called upon for secondary work, which included pouring for curbs underneath the floor-to-ceiling windows in each unit and tie beams throughout the large parking garage on the first and second floor. “These trailer pumps have been workhorses for us on all three tower projects; they never let us down,” said Allen.

LASER-FOCUSED
The high-end nature of the residences at Kalea Bay—and the commensurately high-end flooring within each one—has created a need to take concrete finishing to the next level. To get there, the pumper called on the services of a Somero Sky Screed 36 which, Allen said, has allowed them to meet their customer’s demand while improving onsite efficiency.

“Many of the residences in this tower will be installing four- to five-feet- long plank tile,” he said. “To get material like that to lay down on a post-tensioned deck which, by design, has deflection in it, demands a lot of work. Being able to remove all the variables by putting a laser screed on that surface is a huge plus. In addition, the work that tool is doing will allow us to reutilize eight or more people elsewhere on site. It’s an across-the-board benefit.”

Ben Roberts added that production rates with all their solutions in place have been outstanding—averaging one level every ten days, with one tower topped out every 10 to 12 months. “We should be done with our work in September of this year and the owners are looking at occupancy by June 29, 2022. This continues to be an outstanding opportunity, made better by the people and equipment that make it happen. We are excited to wrap up and move on to Tower 400.” 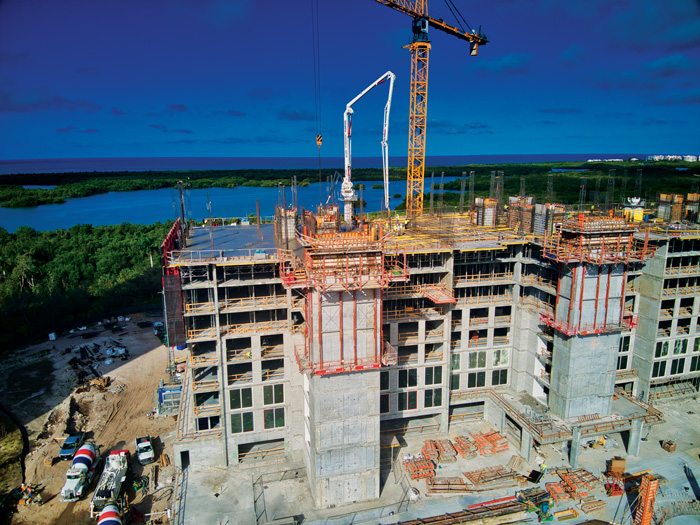 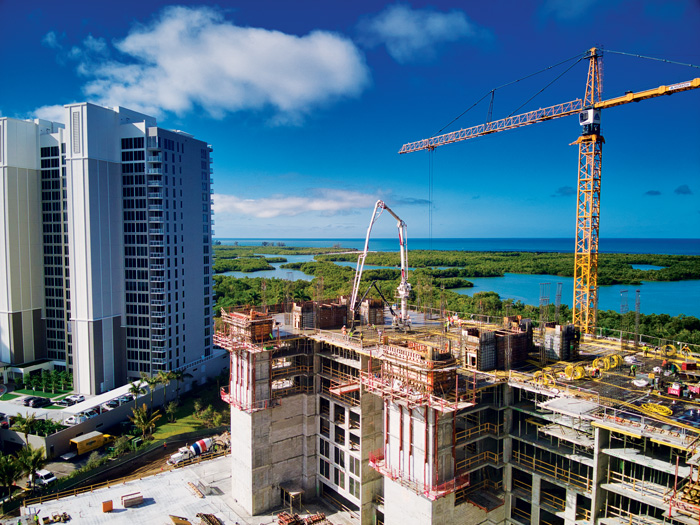 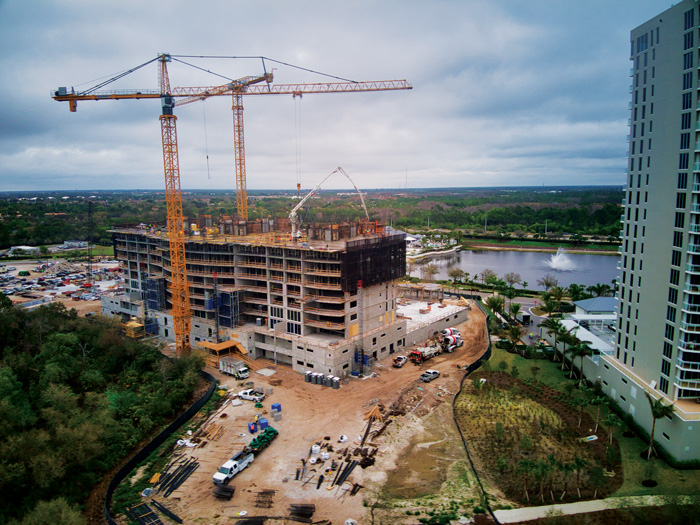 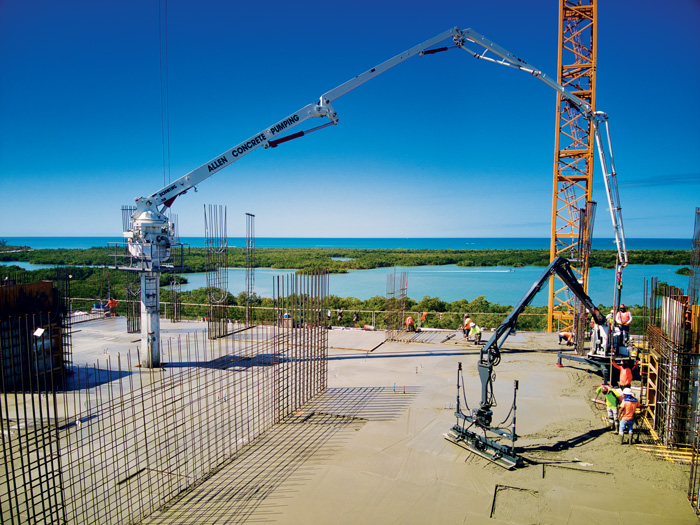 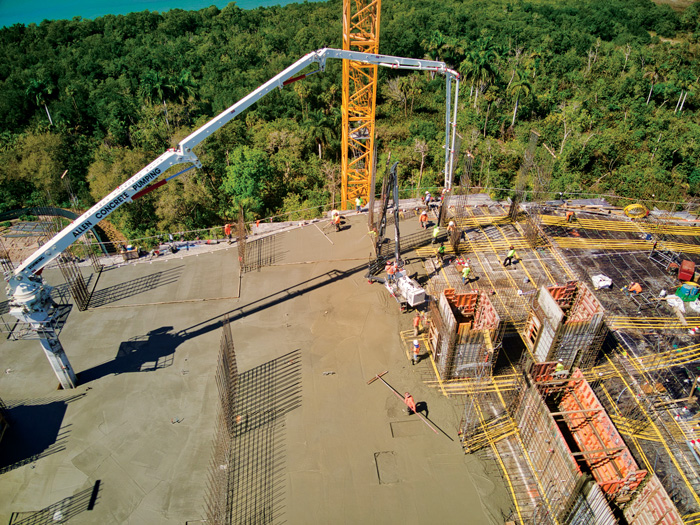