Pumping to the Four Winds

Pumping to the Four Winds

Success is in the cards for Indiana contractor on casino hotel project.

Risking overstatement, there’s not much that FA Wilhelm Construction cannot do. The contractor’s list of capabilities is seemingly endless, encompassing everything from carpentry to HVAC to plumbing to electrical to structural steel to, of course, concrete. It makes perfect sense then, that the Indianapolis-based company was called upon to head up a hotel project that, when complete, will be part of a casino — a casino that they’d also built several years back. Currently wrapping up the concrete facet of the job, Wilhelm has had outstanding success, utilizing a number of truck-mounted pumps as well as a Schwing S 39 SXD detachable unit which has served as the placing boom for the majority of the structure. As Wilhelm prepares to transition from the role of self-performing concrete contractor and begin tapping its other areas of expertise, they acknowledge that, despite pandemic-related setbacks, things could not have gone any smoother.

When Four Winds Casino, South Bend, first opened, the idea of having an attached hotel was not a foregone conclusion. At that time, the casino’s ownership, the Pokagon Band of Potawatomi Indians, said the hotel would become a reality only if the casino was successful enough to support it. After a year and a half of operation, the level of business has apparently met all the parameters needed for the Band to commit to the 24-story hotel which will house 317 rooms, the largest hotel in the Michiana region of northern Indiana and southwestern Michigan.

“This structure is the second-tallest in the area, just two floors shorter than the city’s Liberty Tower, which is clearly visibly from all of our upper pour areas,” said Paul Grider, Wilhelm’s superintendent. “We built the casino and the all-concrete parking garage attached to it back in 2018, so the owners already knew us and had confidence in our capabilities. The tower is 275 feet tall and wraps around to six separate areas which will also include a new gaming floor. Total square footage for the project is about 700,000 sq. ft., 450,000 of which will be in the tower alone.”

When complete, the hotel project will enhance the already-popular Four Winds South Bend facility which has 140,000 square feet of gaming space and includes more than 1,400 games, four restaurants, a players lounge, a coffee shop, three bars, a retail outlet, and parking for 4,500 cars.

Work at the Four Winds site started with the drilling of roughly 400 auger-cast piles which extend downward for 85 feet. Massive mat footings to support the structure’s shear walls contained a couple thousand yards of concrete each. Wilhelm then tackled the pile caps which, according to Grider, set the stage for things to come.

“The caps were huge, taking anywhere from 80 to 100 yards apiece and we handled that with our 52-meter pump,” he said. “When you factor in the 24”-thick walls and varied columns, this tower is very concrete-intensive. In fact, there is only 20% more square footage of slabs than there are walls and columns. This kept our pumps constantly working during all phases of the project.”

It’s important to note that, while Wilhelm’s pump fleet is about a dozen units deep — ranging in size from 20-meters up to 61-meters — Four Winds is just one of many projects they are tackling at once. As a result, pumps were continually being shuttled back and forth between job sites.

“Even with all that iron, we still had times when we needed a pump and one wasn’t available,” said Grider. “In those cases, we rented additional units from a local concrete pumping company. They were a great resource for us.”

The Heat is On

As is frequently done in warmer climates, work on the tower, specifically the slab pours, was performed in the early morning hours: generally between 4:00 and 8:00 a.m. The decision to go that route was driven by the mix design, according to Grider.

“The mix is designed to be very fast-setting to accommodate the post-tensioning process for the 7.5”-thick slabs,” he said. “However, when the sun hits it, the curing process just takes off. Because there are a number of 160- to 180-yard pours on this job, being able to complete the pour before the sun comes up really helps the finishing crews. We typically begin slab pours around 4:30 in the morning and by 9:00 that night it is up to strength at 3,000 psi. Even though it could be stressed at that point, we wait until the next morning to do so. Then, as soon as we are done stressing, we are dropping and flying tables for the next pour.”

When afternoon pours are necessary — for walls and columns, for example — Grider and his team have found that just the heat of sun on the placing boom raises the temp of the mix. To offset that, our concrete supplier, Kuert Concrete, is using a stabilizer to keep the mix from prematurely setting up, either in the boom itself or in the 400 feet of pipe they have feeding it.

“There are a dozen different mix designs on this project, some more challenging than others,” said Grider. “But the pumps have handled them all nicely and our FF numbers for the slabs have been great and that’s important. The whole process has been smooth and has allowed us to maintain our target production rates of one floor every six days.”

Wilhelm handled levels 1 through 4 of the tower using a combination of pumps but relying heavily on their 41- and 43-meter units. At the upper end of those four levels, however, the 197’ reach of the 61-meter came into play, making it the go-to pump for that phase of the tower construction. While a few pours demanded a bit of added system, Wilhelm’s operators worked hard to find locations which minimized the need for it. Upon reaching level 5, the company switched to its 39-meter detachable pump, mounting it on a 60’ self climbing mast. That setup worked extremely well for the balance of the tower pours, said Grider.

“We looked at all the options available to us, including mounting the pump to a self-rising form system on one of the two shafts,” he said. “However, doing that would not have allowed us access to the entire footprint of each floor, forcing us to add a second placing boom. The current placement of the detach unit and mast is ideal for us to reach all areas and I think it’s helped us keep production up.”

Using the self-climbing mast,  the placing boom was raised every two floors, a process that Grider said was quick, generally done in less than two hours. “Because of its close proximity, with the tower crane, Grider said the boom’s four-section design has definitely come into play.

“There have been times when a pour brought us very close to the crane,” he said. “So, having four manageable boom sections affords us a great deal more flexibility on the site; the crane situation was a good example of that.”

Despite the imposing nature of its 61-meter pump, the everyday presence of the 39-meter detach and all the varied pumps in between, Wilhelm’s 20-meter unit has made its presence known throughout the project, both for what it has done — many successful short-rig pours — and for what it could do if needed.

“This business is all about being prepared — that’s where the 20-meter pump comes in,” said Grider. “Mind you, we’ve gotten amazing performance from the 39-meter detach unit and have never had an issue with it. However, should that pump go down for any reason — which would bring production to a halt — the 20-meter’s design makes it a very nice stand-in for the 39. While the output is slightly lower, its higher pressure-on-concrete rating allows for great vertical pumping capability. The smaller unit also features a 180 degree outlet so it can easily be hooked into our existing system. It’s the best backup pump we could ask for.”

Additional pours on the Four Winds project consisted of 576 columns which varied in size but were sizeable at lower levels and decreased as the tower rose. The first two levels of the structure have 20‘ ceilings while the ceilings of level 3 are 23’ tall. As a result, while each column generally took about 1.5 yards of concrete, those lower levels featured some 4-5 yard column pours. All told, total volumes of concrete on the project will top 20,000 cu. yds.

Grider said that, as a company, they’ve come to expect just about anything and experienced that last year when COVID totally shut the Four Winds project down from March through September. “But we came back strong after that and have some of the best people in the industry helping keep it all on track. We just topped out the concrete portion of the project, but still have a lot of work to do before final completion in 2023. At that time, it’ll be satisfying to look at this beautiful complex and know that we played such a huge role in making it happen. It’s a pretty nice feeling.” 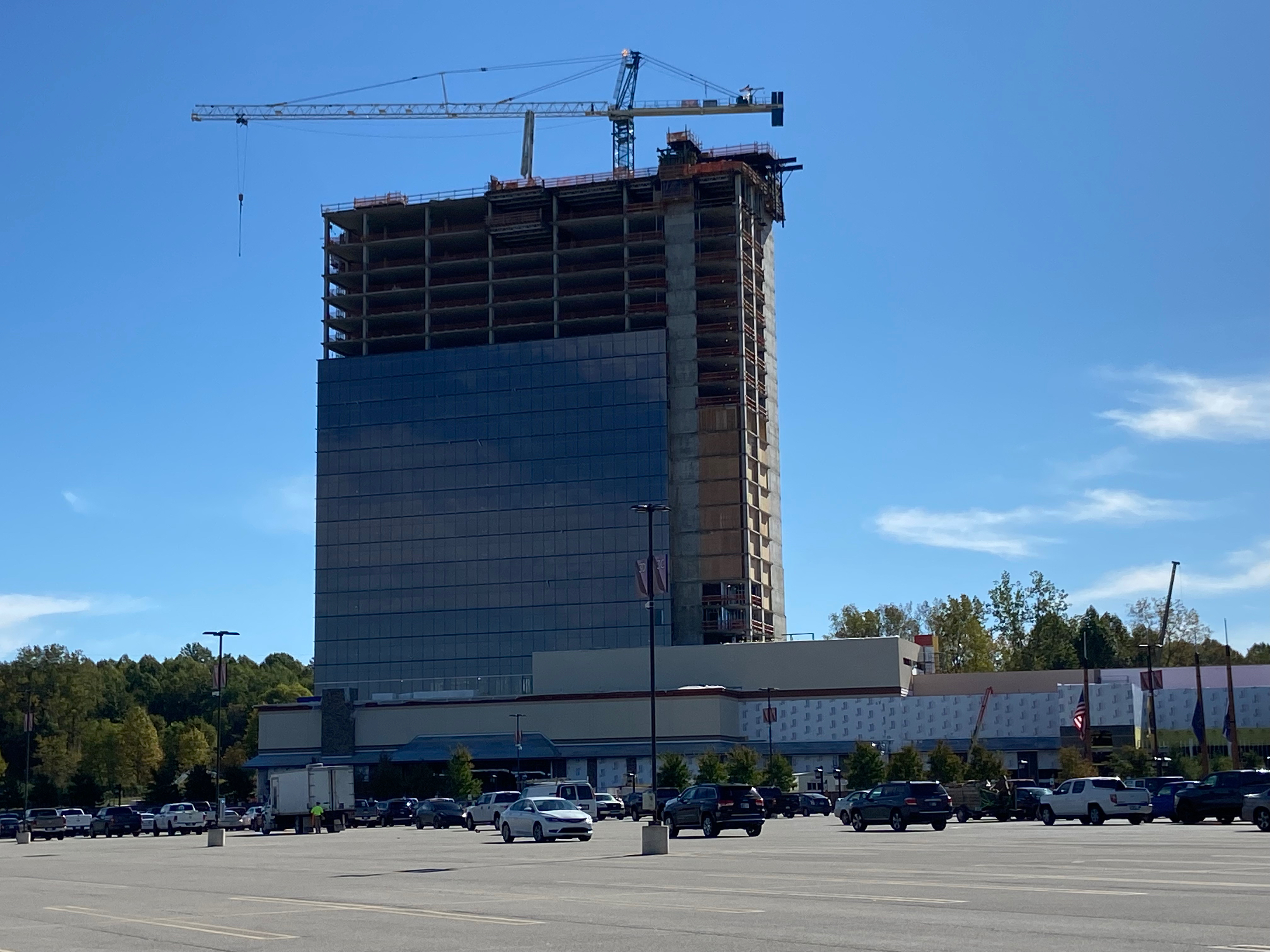