Mountain Project Anything but Rocky

Contractor and pump company get creative in new Denver-area development.
The importance of a good relationship between the concrete contractor and the pumping contractor cannot be overstated. Everything from pump type selection, to scheduling, to equipment positioning and movement is predicated on cooperation and collaboration between these two key parties. Nowhere is that more evident than on a project called Drivetrain currently taking place in the River North (RiNo) district of Denver. There, faced with a number of unforeseen circumstances, representatives from McClone Construction and the Denver branch of Brundage-Bone Concrete Pumping worked together to formulate a plan that flew in the face of conventional pumping logic. The net result of doing so, however, was a minimizing of costs, a streamlined overall workflow and a successful outcome. Communication — it’s a beautiful thing.

The Drive to Succeed
The RiNo District north of Denver is actually a collection of five historical neighborhoods: Globeville, Elyria-Swansea, Five Points and Cole, that have found common ground in connecting their respective arts organizations. In the last decade, that effort has led to a steady influx of new businesses to the area, with construction soaring in the last five years, according to Rob Gardner, Brundage-Bone’s general manager for the Colorado/Wyoming region.

“The RiNo District is one of the fastest growing areas in the entire Front Range,” he said. “Because it is an art-focused community it is thriving with new galleries and exhibit spaces. Along with that, have also come boutique hotels, restaurants, shared workspaces and upscale residences similar to what we are currently building here with Drivetrain.”

The project to which Gardner refers is a six-story development that grows to seven stories on its west side. When complete, it will offer more than 400 residential units, retail space at street level and two levels of below ground parking with capacity for more than 550 cars (and 170 enclosed bicycle stalls). Concrete, from the mat slabs upward to the second level above ground, the balance of the structure is wood-frame in nature. In the planning stages since the owner, Carmel Partners, acquired the site in early 2018, the project broke ground in August of 2019, and, for those associated with the concrete, almost immediately became anything but “another job.”

Formulating a Plan
Work at Drivetrain was an exercise in anticipating challenges before they could become issues. For McClone and Brundage, that meant meetings well before the first yard of the 23,000 cu. yd. project was pumped, to deal with, among other items, access, which was limited to only two sides of the site. Really driving the discussion, however, was the owner’s request that one half of the structure be turned over and ready for framing at an earlier date than typically anticipated.

“We had several meetings to specifically discuss pump options before we were onsite,” said Dillon Starrett, McClone’s operations manager. “At the top of the list was the best method of concrete delivery. Available options included a placing boom, which we voted against because of the anticipated level of usage, the logistical challenges at the lower levels, and cost. A placing boom spider was also considered but would still fall short on the longest reach.”

After walking through all those options and scenarios with Rob Gardner, Starrett finally discussed the possibility of driving pumps into the excavation and onto an already-poured mat slab. “We knew that even with Brundage using its Schwing S 65 SXF concrete pump, some of the reaches would still be pushing the limits, but we said we would do everything we could to get them close and they said they’d make it work for us from there. We had a plan.”

Everything’s in Order
Finding the best means to deliver the concrete was just one part of the Drivetrain puzzle. McClone and Brundage still had the daunting task of formulating the proper sequence for getting the 24- to 30-inch thick mat slabs — and the 8”-13” thick cast-in-place, post-tensioned elevated decks above them — efficiently poured so that upper level work could begin. Again, planning and interaction were key.

“With the help of Justin Henry, McClone’s senior superintendent, and Sammie Mora, the company’s assistant superintendant, McClone took the huge step of dramatically changing their pour sequence and schedule,” said Gardner. “That allowed us to ramp the 65-meter and 58-meter pumps into the hole and, starting on the far side of the excavation, bring one side of the project all the way up to top level of concrete, two levels above street. These were massive areas to pour, so the reach of each pump — 197’ 6” on the 65-meter and just over 175’ for the 58-meter — was huge. We also benefited from the tight, 29’ 2” front outrigger spread of the S 58 SX, since we needed the two pumps so close that the front and rear outriggers were literally intertwined — it was like that on almost every single mat pour. Because the 65-meter pump utilizes a boom dampening system, any movement caused by a concrete surge was minimized resulting in smoother overall pours. So, we poured a 45,000 sq. ft. mat slab, then poured the level above it, then the street level, followed by two podium decks above that.”

Starrett added that Rob Gardner came out prior to almost every pour, both to ensure the viability of what was planned and to confirm the pump size needed for the work at hand. That included recommending a smaller pump when possible, which helped keep costs down. “The level of commitment from Brundage-Bone, coupled with the reliability of their pump fleet, was exceptional,” said Starrett.

Strong Support System
With concrete poured to the level at which framing could begin on the upper levels, Brundage and McClone once again turned their attention to the remaining mat slab and the second half of the structure.

“The engineers designed the structural integrity of the mat slab to support the weight of the pump truck and the ready mix trucks,” said Gardner. “So, we were able to set up on the mat slab we had done a couple weeks prior, to complete most of the pours.”

Even that facet of the job was not without its challenges, however. By the time there was a single mat slab remaining to be pumped, walls had been constructed and space was at a premium.

“For the very last mat pour, we left just enough clearance to have a pump down on the existing mat slab,” said Starrett. “However, there was not enough space for the ready mix trucks in that area. Because these were high yardage pours — 500 to 800 yards or more — we used an S 32 X 32-meter pump up on the top of the lagging and piggybacked down into a second pump in the hole. We also had the 58-meter unit pumping from the high side of the site — in essence, we had three pumps on that one final slab pour.”

Straddling the Line
With the mat slab pours complete, Brundage could at last begin setting up at street level to complete the balance of the podium deck work. Although space was extremely limited, with two sides of the site either inaccessible or deemed off-limits to truck traffic, they made it work.

“We straddled the property line with two outriggers on the property and two extending partially into the street to get the pours we needed,” said Gardner. “The logistics on this job were pretty impressive considering that Josh Joiner and his team at Martin Marietta, the ready mix supplier, had a steady stream of 20 trucks — easily double that amount during the mat slab pours — bringing in material from both their Denver and Arvada locations and navigating a congested job site. In fact, Josh was part of all our pre-pour walks and helped create many of the technical set-ups to ensure we got a flawless supply of concrete.”

One of the trades which often gets overlooked, but which Gardner felt was also key to the project’s success, is the concrete finishers, in this case Rocky Mountain Excavating, dba ESI. “These guys made sure each and every pour went off without a hitch,” he said. “Despite some 1,000+ yard pours, they always had the manpower when we needed it and never skipped a beat. In their business, they are top notch in every aspect of their craft.”

Starrett said they are expecting to top out by November 3 and be totally off site by the end of the year.

“It is our job as a builder to provide the most value we can to our clients,” he said. “In this case, to ensure that, we sat down with our partners at Brundage-Bone to come up with a plan that kept the job a successful one for us, while also delivering what the client needs. Brundage is extremely good at giving the time and resources necessary to plan the project from the start. It is not uncommon for them to come to our office while we are in the bidding stages of a project to brainstorm, then, based on that input, suggest the best way to deliver concrete on the project. Much of our success locally can be attributed to the planning and collaboration done on the front end with the Brundage-Bone team.”

Gardner said that, at Drivetrain, they relied almost exclusively on their 58-meter and 65-meter pumps and did so for a reason. “On projects in which there are many variables — and this was definitely one — these pumps tend to be our go-to units. At the end of the day, if our customer is satisfied, our largest goal, after safety, has been met.”

Drivetrain is projected to be ready for occupancy in Q4 of 2021 and fully complete by Q2 of 2022. 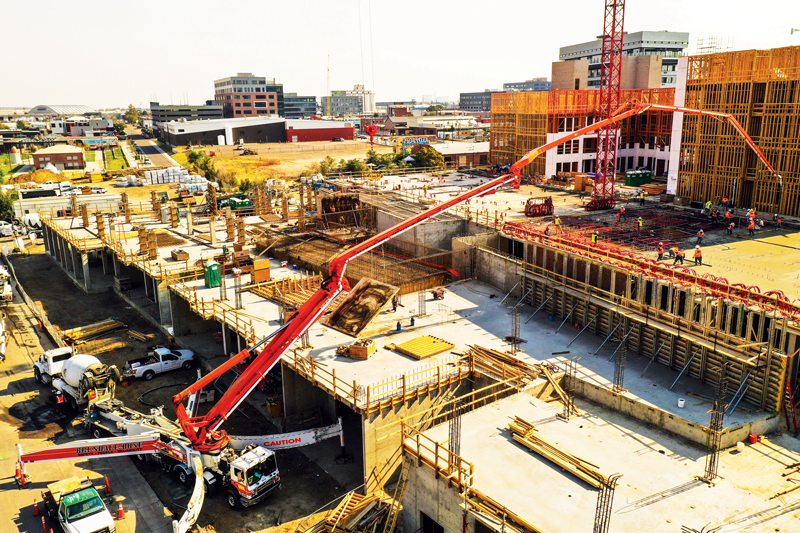 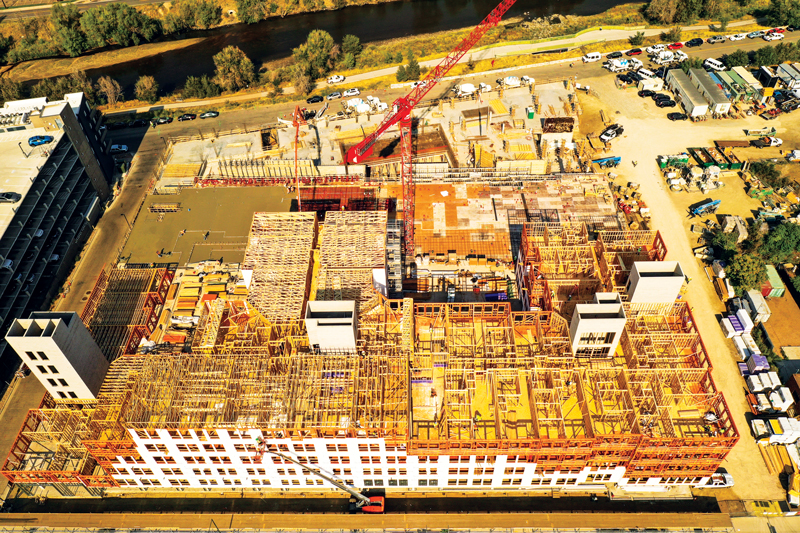 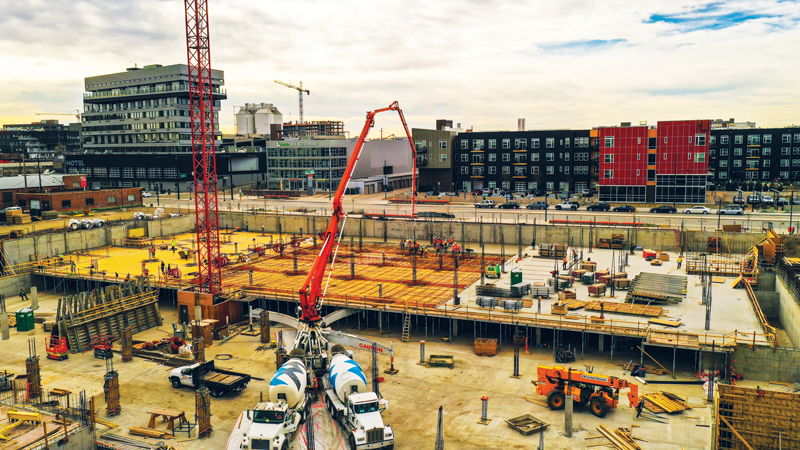 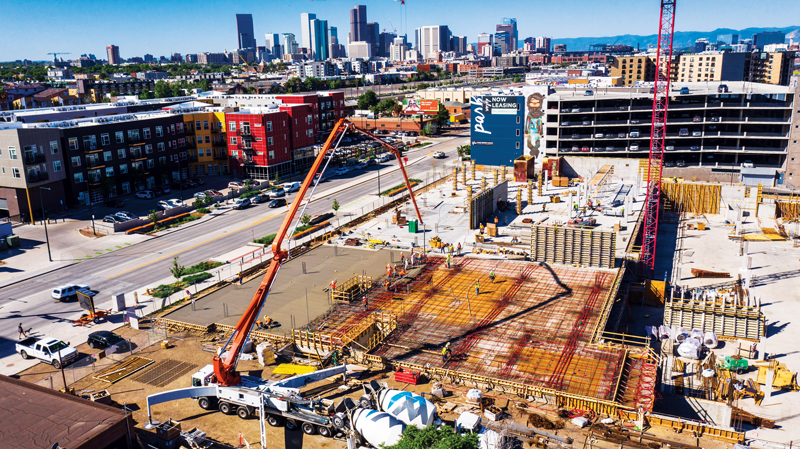 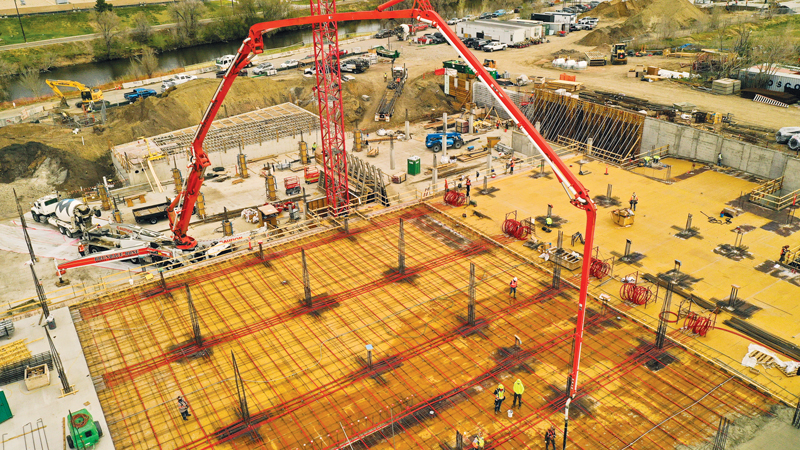