A pair of detachable placing booms is helping McGough Construction give a Minneapolis parking area the ultimate makeover.

As it is in most major U.S. cities today, real estate in downtown Minneapolis is at a premium and is generally developed as quickly as an existing structure can be cleared. However, in the heart of the city, two blocks from the fabled Mississippi River, a full city block plot of land relegated to service as an at-grade parking lot since the early 1990s is getting its just due. There, work has begun on a 37-story tower that, when complete, will house the world headquarters of RBC Wealth Management, a Four Seasons hotel (the city’s first 5-Star hotel), several companies, 33 private residences, street-level retail and a public outdoor plaza. To accommodate the Twin Cities’ notoriously-tough winters, the new development will also be incorporated into the city’s 11 mile-long skyway system. Using truck-mounted boom pumps as well as a pair of Schwing 35-meter and 37-meter detached placing booms on self-rising forms, locally-based general construction firm McGough Construction is helping turn this once mundane site into what’s sure to be one of the city’s premier mixed-use developments.

Inside the Gateway
With a lineage in the commercial construction business that dates back to the late 1800s, McGough Construction Company, Inc. has grown steadily, today employing more than 800 people throughout its seven Midwest and south central U.S. offices. The company’s specialties are broad and include everything from high-end healthcare facilities to major educational campuses to state-of-the-art data centers and science facilities to award-winning residential and mixed-use projects. So, according to Scott Wingrove, McGough’s project executive, the company was well-positioned to secure the bid for the Gateway MXD project, as the new high-rise is known.

“Gateway is an ideal fit for our areas of expertise,” he said. “The project will be a 36-story tower with three floors below grade dedicated to parking, all capped off by a mechanical ‘penthouse.’ Square footages on each level vary, tapering from 70,000 sq. ft. in each parking level to 50,000 sq. ft. on each of the podium floors to 30,000 sq. ft. for each of the office levels before finalizing at 18,000 sq. ft. for the floors that will accommodate the hotel and condo residences. All told, the structure will offer more than 1.2 million square feet of mixed-use space.”

McGough broke ground for the new structure in June 2019 with foundation work starting in September of that same year. A series of piles, measuring from 3’ to 10’ in diameter were drilled to serve as the platform upon which a pair of 62’ X 30’ cores — one of the more distinguishing features during the early phase of the project — would rise. Depending upon soil conditions, rock socket depths also varied from as little as 5’ to about 40’.

“That S 58 SX was involved in pumping all of the parking garage as well as the lower parts of the two cores,” she said. “Pumping has actually been the easy part. More than anything, our biggest challenge has been dealing with traffic in Minneapolis. This jobsite encompasses an entire city block, so we are dealing with traffic on all four sides — getting trucks in and out of here can be a headache at times, but we’re dealing with it.”

To deal with those issues, McGough constructed a ramp down onto the P3 level to allow concrete trucks to access and tailgate the caissons and slab on grade. Once those were poured, they transitioned to concrete pumping which called for lane closures along Third Street on the south side of the project during pours. They are continuing to coordinate with the City for added lane closures as required to complete the concrete operations for the elevated decks and columns.

“Because we are right in the heart of downtown, site logistics were key during the preconstruction phase and is still a daily topic of conversion,” said Wingrove. “Not only do we have the entire perimeter closed off with Jersey barrier and fencing, we also shut down one lane of traffic on Third Street and closed off all four sides to pedestrian traffic. We also continue to work with the City of Minneapolis on periodic lane closures for specific tasks such as skyway work, flying equipment etc.”

It’s in the Garage
For work on the 455-space parking garage, A-Star kept its pump busy pouring decks and more than 100 columns on each 70,000 sq. ft. level in the structure. The elevated parking levels were 8” thick two-way post-tensioned slabs handled in seven pours per level, with pour strips in between. Mix design for the decks called for an 8,700 psi mix at 28-days, with air entrainment and a corrosion inhibitor.

Column sizes ranged from 20” X 42” up to 42” X 54”. Borowicz said the high-strength nature of the mix made the column pours a bit challenging, but, as expected, the S 58 SX handled it all just fine.

“Right now, there are more than 25 mix designs on this project and the specs for the columns called for an additive-rich 12,000 psi mix,” she said. “We own and operate 14 pumps and I know what each one is capable of. That 58-meter pump is rated for 1169 psi maximum pressure on concrete. I knew it could handle that high-strength material and it did not let us down.”

Minneapolis Boom Times
Once out of the ground and up to level three of the structure, the concrete placing operation moved from truck-mounted concrete pumps to one in which placing booms would carry the load. To do that, A-Star called upon a pair of truck-mounted concrete pumps with detachable booms. The 37- and 35-meter separate placing booms are each fed by a 2023-6 pump kit which, in addition to providing pressures up to 1621 psi, deliver a smooth operation with lower noise levels, lower operating temperatures, and longer life. The kits are Generation 3 from Schwing which, by nature of separating out the power pack and other components, make for a lighter crane pick.

To ensure steady progress from those placing booms and the best possible access to all areas of the site from the two rising cores, McGough mounted each boom onto a SureCore Self-Riser System from SureBuilt.

“In order for the 24” and 18” thick core walls to sufficiently cure, the concrete strength needs to achieve 3,000 psi before the core system can be jacked upward,” said Wingrove. “The core walls themselves, are pretty substantial, containing more than 10,000 cu. yds. of concrete. We are staying two levels ahead of the work below and are jacking the system and corresponding placing boom 20 feet upward every eight days. That’s proven successful in keeping production levels up.”

The 5” thick decks for each level are being poured using custom fiberglass pans as part of a Peri Skydeck panel slab formwork system. According to A-Star’s Borowicz, they are getting production rates of 100 yd./hr. pumping those pan decks. And, though the heartiness of the concrete for the columns lessens as the structure rises — reducing from 12,000 psi to 10,000 and settling in at 8,000 — she said pumping the lower columns is allowing the placing booms to shine.

“Given the lack of water and all the additives, this is not the easiest material we’ve handled, but these pumps are definitely showing they can take it.”

Stepping to the Podium
The 50,000 sq. ft. podium feature of the Gateway structure consists of four levels before it steps back to the main office tower. It was in the early facet of the podium pours that McGough encountered one of the most challenging areas to date. A combination of factors, including beams as deep as 8’ and the presence of a ballroom directly below, prompted the need for reshoring around two of the future hotel’s pools on Level 4.

“This was a very unique situation which demanded that our reshoring in this area had to extend all the way down to P3 — approximately seven levels below the pour,” said Wingrove. “We also had some reshoring that needed to be set in a clerestory area. In that case, the reshoring extended from Levels 2 to 4.”

While some contractors running twin placing booms might eliminate one for the upper reaches of the structure, McGough will be keeping both for the duration of the Gateway job. According to A-Star’s Borowicz, eliminating a placing boom and replacing it with additional line or a mini-placer can sometimes actually be counter-productive.

“Mini-placers certainly have their place in our business, but once you start moving that unit six or seven times in a pour, it becomes anything but efficient,” she said. “At that point, you are better served keeping the second placing boom and eliminating all that lost time.”

Designs Abound
As mentioned above, there are currently more than 25 mix designs in play at the Gateway project. According to Cemstone’s Jeff Claude, the possibility exists for others to be added as well.

“There are so many components to this project that demanded a specialty design,” he said. “Some of the products in use include: a corrosion inhibitor which is incorporated into the parking ramp & some drive areas; higher strength post-tensioned deck mixes, which were utilized to avoiding puddling of high strength column mixes integrally into a deck placement; lightweight concrete mixes, that were used on several floors; and the use of some MVRA admixture.”

Claude added that each mix design will be adjusted for slump based on the psi value & McGough’s need for pumpability per elevation, consolidation, placement rate per hour, set time & finishability. In addition, some SCC mixes may be used as the building climbs in elevation.

Topping it Off
Though the completed height for the structure will come in at about 519 ft., by the time A-Star begins pumping the 36th floor, it will be doing so through more than 800 ft. of system to each of the placing booms — testimony to the power each pump represents.

“On projects like the Gateway, we rely on our subcontractors to always bring their “A” game — including their best personnel and equipment. A-Star has certainly done that here. Both their truck pumps and the detachable placing booms have been workhorses for us and have played an important role in keeping us on track.”

The Gateway MDX is slated for a 2022 opening. 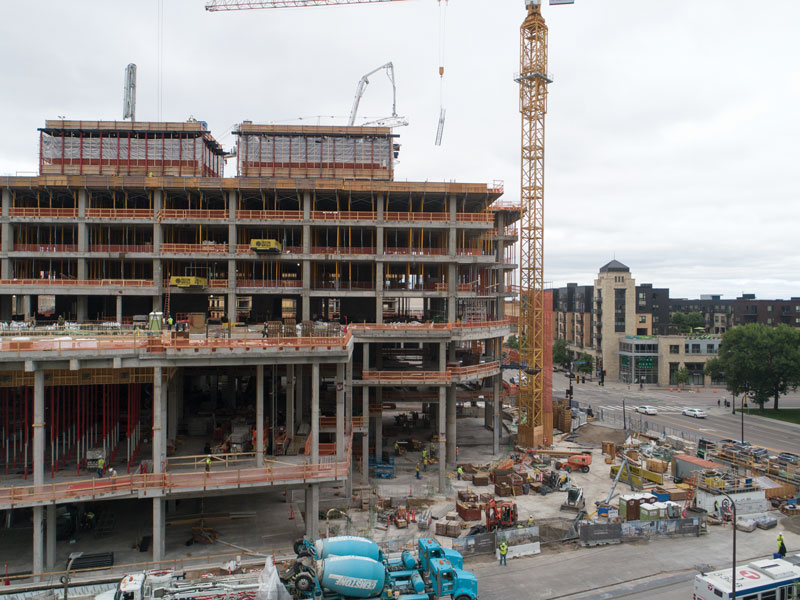 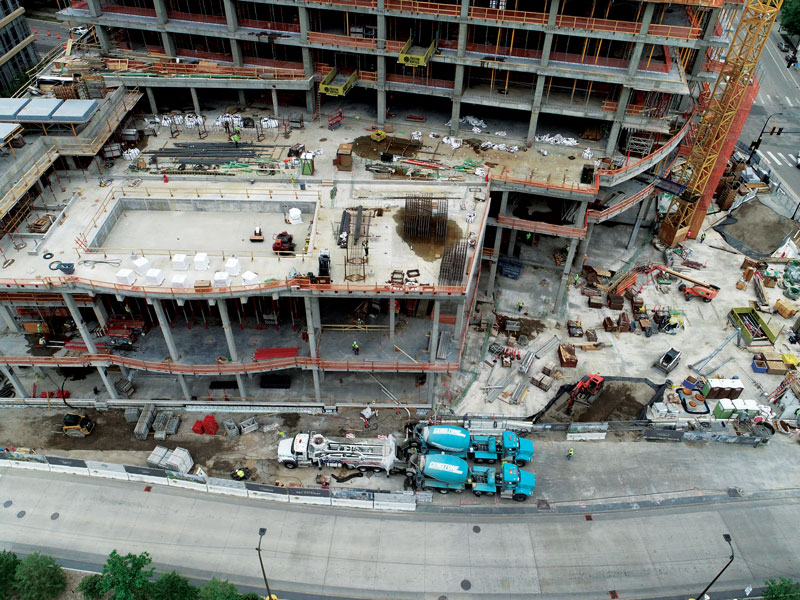 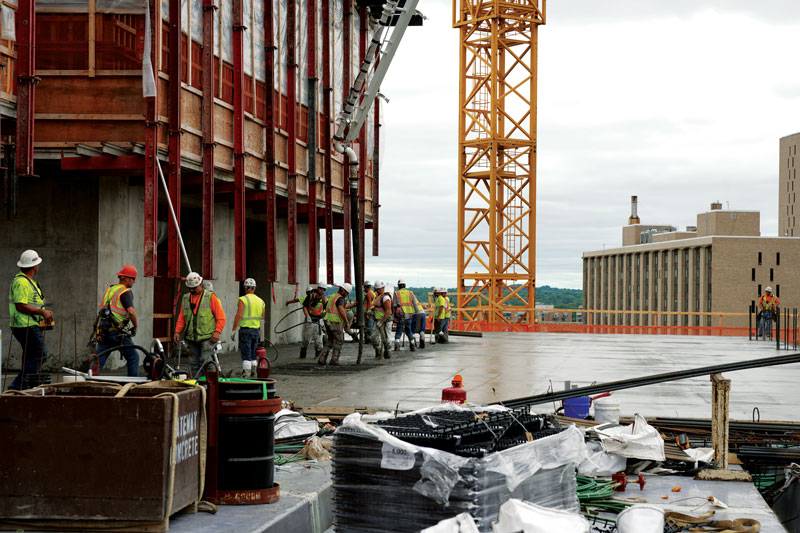